Colorectal cancer (CRC) is the 3rd leading cause of cancer death worldwide. It is responsible for more than 16,000 deaths per year in France. 5% of metastatic CRCs present an MSI (microsatellite instability) tumor phenotype related to a deficiency in the DNA mismatch repair system (dMMR). It has recently been shown that newer immunotherapy drugs (immune checkpoint inhibitors) are particularly effective in patients whose cancer has the MSI/dMMR phenotype. Thus pembrolizumab (anti-PD1 antibodies) has been approved by the American authorities (FDA: Food and Drug Administration) for the treatment of patients with metastatic MSI/dMMR CCR resistant to conventional treatments, based on preliminary data from the KEYNOTE-164 study.

This publication presents the complete results of the KEYNOTE-164 study. This is a Phase 2 study that included patients with metastatic MSI/dMMR CRC previously treated with a minimum of two lines (Cohort A) or one line of standard therapy (Cohort B). Patients received pembrolizumab 200 mg intravenous every 3 weeks until unacceptable progression or toxicity, for a maximum total of 2 years.

124 patients were included. Respectively 44% and 30% of patients in cohorts A (N=61) and B (N=63) had received more than 3 lines of treatment previously, and more than half of the patients in each cohort had an impaired performance index. With a median follow-up of 31 months (cohort A) and 24 months (cohort B), the objective response rate (defined as more than 30% reduction in tumour mass) was 33% in each of the 2 cohorts. The median duration of response was not reached (time from first documentation of response to tumour progression or death). The median overall survival was 31 months in cohort A and was not reached in cohort B. Treatment had to be discontinued in 2 patients in each cohort due to side effects (hepatic cytolysis, pneumonitis). 16% and 13% of patients in cohorts A and B respectively experienced treatment-related side effects, including dysthyroidism and colitis.

Updated data from the KEYNOTE-164 study confirms that immunotherapy is an effective therapeutic strategy, with lasting clinical benefit, in patients with metastatic MSI/dMMR CRC. 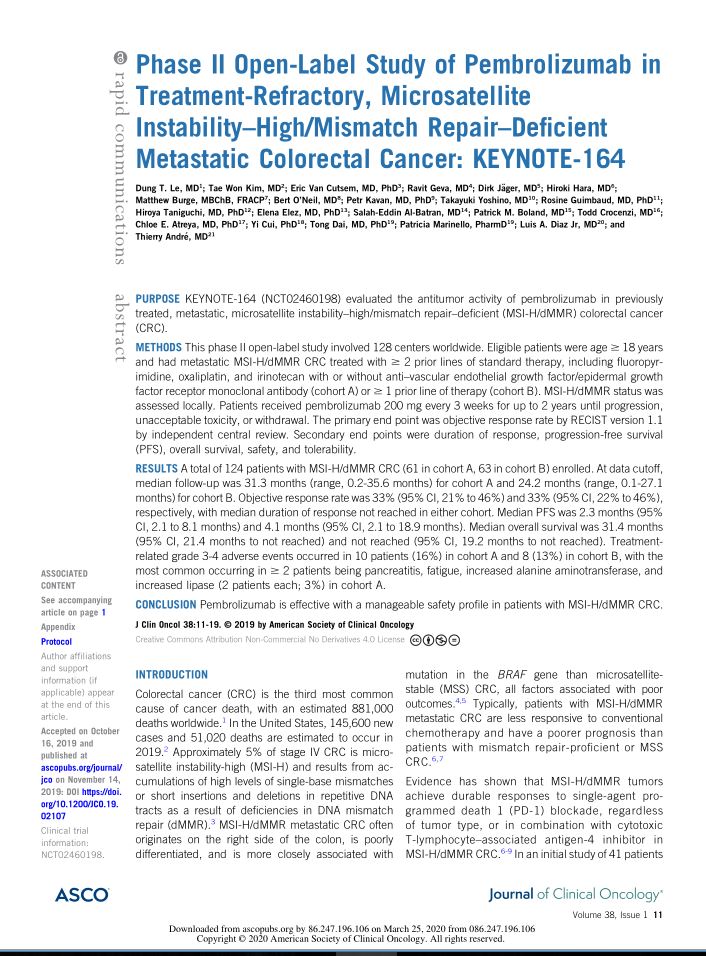