MSICare is a computational tool for MSI phenotype detection with next-generation sequencing (NGS) data. The algorithm is based on the comparison of the reads distributions between normal and tumor samples.
Mononucleotide repeats (MNR) with a length ≥ 12 base pairs (bp) were considered for analysis only if they were covered by at least 20 mapping reads in both normal and tumor samples. The total number of reads covering each candidate MNR was then normalized (arbitrary value of 100) in tumor and matched healthy tissue. For each MNR, the normalized number of reads in healthy tissue was subtracted from the normalized number of reads in tumor tissue [∆Ratio = %Tumor-%Normal] to generate an MSI index (MSI signal, MSIg) corresponding to the sum of ∆Ratio values for all candidate MNR. The ∆Ratio value was then adjusted by estimating the tumor purity (TP) for each tumor sample, with the estimated TP corresponding to the median value of the MSI signal for all MNR with a length ≥ 14 bp covered by at least 30 reads in tumor and 20 reads in normal tissue. The adjusted value for ∆Ratio was then used to classify a given MNR as wild type (∆Ratio-adjusted = ∆Ratio x Estimated TP < 50%) or mutated (∆Ratioadjusted = ∆Ratio x Estimated TP ≥ 50%) given that observed microsatellite mutations can be either heterozygous or homozygous in primary tumor samples. Finally, the MSICare score for tumor samples corresponds to the percentage of microsatellites that were mutated amongst the total number of microsatellites analyzed using this approach. 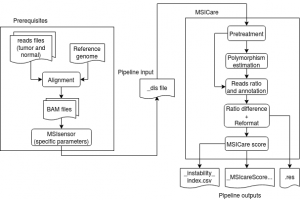 The _MSIcareScore_12_50percent.csv file reports the percentage of unstable loci as a cumulative score in the tumor and thus the MSI status.
The .res file contains detailed information on each microsatellites analysed.

The tool can be obtained by contacting corresponding author Alex Duval using the contact form at the end of this page.
The tool can be shared for free in the context of non profit academic research. As some of its features have been patented, you will have to complete a Data Transfert Agreement (DTA).

Then you can obtain the coverage of the mononucleotide microsatellites of minimum length of 5 in the tumor and normal paired samples from sorted and indexed bam files.
msisensor msi -d microsatellites.list -n normal.bam -t tumor.bam -o output.prefix -p 5 -x 1 -f 10

In the folder given with -o you will find a file terminating by _dis that is the input of MSICare.sh

To run the main script MSICare.sh you need python2 and R (tested with version 3.5.2)
python libraries : numpy and pandas

The script take 3 mandatory positional arguments and two optional one